Alimemazine has a central sedative effect, comparable to that of chlorpromazine, but largely devoid of the latter’s antiadrenaline action. It has powerful antihistamine and anti-emetic actions. Alimemazine is used to treat neurosis, depression and anxiety of different origins. It prevents and relieves allergic conditions, which cause pruritus and urticaria by blocking histamine produced by the body during an allergic reaction. Alimemazine competes with free histamine for binding at HA-receptor sites. This antagonizes the effects of histamine on HA-receptors, leading to a reduction of the negative symptoms brought on by histamine HA-receptor binding. 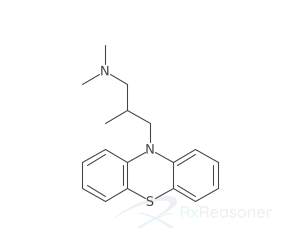